What Is Autoimmune Anemia In Dogs 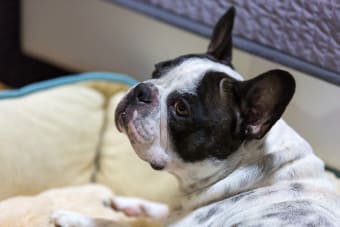 If your dog is diagnosed with autoimmune anemia your vet will begin the process of diagnosing and treating underlying illnesses that might be causing your pup's condition. Our Franklin vets explain.

What is anemia in dogs?

Anemia is a condition which indicates that your dog is suffering from an underlying disease or condition. Anemia in dogs occurs in four different ways:

There are two unique types of autoimmune anemia seen in dogs, primary and secondary.

Primary autoimmune anemia in dogs occurs when your pup's immune system creates antibodies to incorrectly fight off and destroy its own red blood cells. This form of anemia occurs due to a problem with your pet's immune system.

Conditions that can lead to secondary autoimmune anemia in dogs include cancer, infections such as Ehrlichiosis or Leptospirosis, parasitic infections including Babesiosis, snakebites, drug reactions, toxins or even bee stings.

Signs of Autoimmune Anemia in Dogs

If your pooch is displaying any of the symptoms listed above it's time to head to the vet.

If your vet believes that your dog is suffering from anemia they will perform a number of blood tests including a complete blood count (CBC) and packed cell volume (PCV) to determine the type of anemia causing your pet's symptoms.

If autoimmune anemia seems likely your veterinarian will run further diagnostic testing to help determine the cause of the anemia. Tests may include chest and abdomen x-rays or ultrasounds as well as further blood tests to look for parasites or toxins and urinalysis to check kidney function.

Treatment for Autoimmune Anemia in Dogs

If your vet is unable to determine an underlying cause for your dog's anemia, or if your dog is suffering from primary or idiopathic autoimmune anemia, immunosuppressive therapy will be prescribed. This form of treatment typically includes immunosuppressive doses of corticosteroids (prednisone). In more complex cases a combination of immunosuppressive medications, such as cyclosporine or azathioprine may be necessary in order to get the condition under control.

For dogs suffering from secondary autoimmune anemia, treatment will focus on addressing the underlying cause of the condition. Depending on the cause of your dog's anemia treatment may include toxin antidotes, heartworm treatment, or antibiotics.

If your dog is suffering from a severe life-threatening case of autoimmune anemia a blood transfusion may be necessary to stabilize your dog's condition while other treatments take effect.

Note: The advice provided in this post is intended for informational purposes and does not constitute medical advice regarding pets. For an accurate diagnosis of your pet's condition, please make an appointment with your vet.

If your dog is showing signs of autoimmune anemia it's time to head to the vet! Contact our Franklin vets for diagnosis and treatment.

Pet Vet is accepting new patients! Our experienced vets are passionate about improving the health of Franklin's companion animals. Get in touch today to book your pet's first appointment.